I shall never cease to be thankful...

I shall never cease to be thankful that my wife took up the study of Christian Science for the healing of a physical disorder, for it was through her study that I became interested in it. I had no religion of my own, although I had gone to an orthodox Sunday School when a child, and Christian Science seemed to me to offer everything that one could want in a religion, including healing.

I have had many healings; one was that of a sprained ankle. This happened while I was working at a large defense plant. The pain was intense, and I reached out to God in prayer. The ninety-first Psalm from the Bible and truths from the Christian Science text-book, Science and Health by Mrs. Eddy, came to my thought.

Send a comment to the editors
NEXT IN THIS ISSUE
Testimony of Healing
I should like to express gratitude... 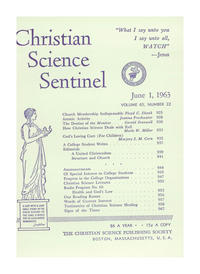