Christian Science came to me in answer to my prayer to know God. When I was in my teens someone tried to convert me to atheism. Although I was attending an orthodox Sunday School, I began to question God's existence. My mother, who was very devout, was much disturbed by my doubts. So I prayed nightly, knowing that if a Supreme Being existed, I would have proof of its existence.

Very shortly Christian Science periodicals were sent to our home from across the country by my sister. My parents read them, but I did not. Several months later, when my sister who had sent them was visiting us, I saw her quickly healed of quinsy; and after having read to her at her request from Science and Health by Mrs. Eddy, I was able to accept Christian Science myself.

Send a comment to the editors
NEXT IN THIS ISSUE
Testimony of Healing
I am very grateful for the following... 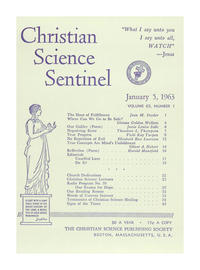