The Christian Science Standard of Healing

Nothing is more vital to successful healing in Christian Science than strict adherence to the standard of healing established by our beloved Leader, Mary Baker Eddy. This standard is clearly set forth by her on page 167 of the Christian Science textbook, "Science and Health with Key to the Scriptures," in the following statement: "It is not wise to take a halting and half-way position or to expect to work equally with Spirit and matter. Truth and error. There is but one way— namely, God and His idea— which leads to spiritual being. The scientific government of the body must be attained through the divine Mind. It is impossible to gain control over the body in any other way. On this fundamental point, timid conservatism is absolutely inadmissible. Only through radical reliance on Truth can scientific healing power be realized."

This unequivocal statement of the Christian Science method of healing is not modified by any other statement in the textbook or in our Leader's other writings. To depart from this standard of practice, to rely on any material means for healing, or to endeavor to mix spiritual means with the material is not in accord with Christian Science. Such a departure, instead of helping the patient, can only result in limiting the demonstration of scientific healing power. 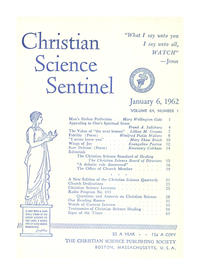