My father, a druggist, first became...

My father, a druggist, first became interested in Christian Science while living with a family of Scientists in Canada. He was so impressed with the religion that he gave up his profession and started to study Science. While studying, he was healed of the smoking and drinking habits. On returning to the United States, he tried unsuccessfully to interest my mother in his new religion. However, when she was dangerously ill after many years of sickness, she wholeheartedly accepted Science and had an immediate healing.

For many years I benefited from the truths of this Science, but not until I was married and had had my third child did I realize the need of constant study. 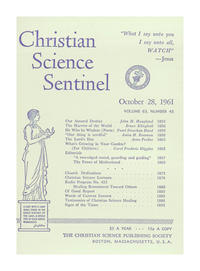