When I was a small child, my mother, after being given up by the doctors, was healed in Christian Science. Then my three brothers and I were enrolled in a Christian Science Sunday School, and I have had no help but Christian Science since that time for physical, mental, moral, social, and financial problems.

During my early and middle teens I passed through a period of mental turmoil with much doubt and discouragement. At no time did I want to give up Science for something else, but it did not seem to be working for me; so I stopped studying the weekly Lesson-Sermons in the Quarterly.

Send a comment to the editors
NEXT IN THIS ISSUE
Testimony of Healing
After many years of heartfelt... 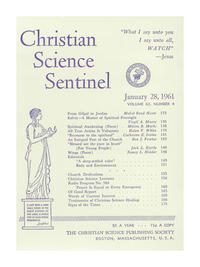