Charles M. Carr, C.S.B., of Montclair, New Jersey, was born in Melrose, Massachusetts. He received his early education in the public schools of Ridgewood, New Jersey, and in Chauncy Hall Preparatory School in Boston and later attended Massachusetts Institute of Technology. Much of his business activity was as an advertising space salesman for trade and consumer magazines. 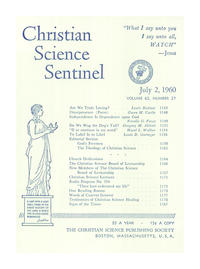