One day an issue of the Sentinel...

One day an issue of the Sentinel was sent to my husband, who was recuperating from a serious illness. When I returned home from work on that particular day, I did not feel well. While eating dinner I became ill and quite frightened. An attempt was made to call a doctor, but he was out of town. Another one was called, but he was ill and could not come.

I saw the Sentinel on the table, and I picked it up and started reading it. Prior to this time I had tried to read one, but could not understand it; this time, however, was different, and soon I felt free from all discomfort. Two days later I went to the Reading Room to purchase a copy of Science and Health by Mrs. Eddy. As the attendant handed me the textbook, she drew my attention to the opening statement in the Preface, which reads (p. vii), "To those leaning on the sustaining infinite, to-day is big with blessings." These words impressed me, and I was so greatly moved that I went out of the Reading Room with tears of gratitude in my eyes. 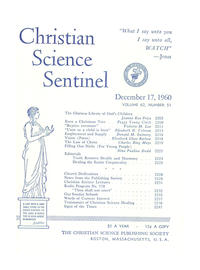