The teachings of Christ Jesus compassed the whole of metaphysics. His understanding of the allness of divine Mind, God, enabled him to penetrate the recesses of mortal thought and bring the light of Truth to bear upon deeply hidden mental darkness. He destroyed the conscious and unconscious states of thought which produce sin, disease, lack, storms, death. He said (Luke 8:17), "Nothing is secret, that shall not be made manifest; neither any thing hid, that shall not be known and come abroad."

Christian Science fulfills the Master's prophecy and uncovers the hidden workings of so-called mortal mind. By demonstrating God to be the only Mind, this Science proves the unreality of an evil mind with its claims of both conscious and unconscious, voluntary and involuntary mental action. There is no unconscious substratum in divine Mind, and man, who is Mind's idea, God's spiritual image and likeness, reflects the divine Mind alone. When through Science this fact is brought to bear upon the belief that disease is developing unconsciously and involuntarily in the body, the destructive action of mortal mind is stopped. Material sense, in which such action seems to originate, is proved to be unreal and without authority or power to impose its beliefs upon mankind. 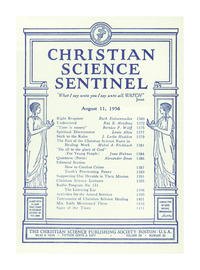