Darwin, one of the great men of science, did not prepare for his career until he had spent 2 years studying medicine at the University of Edinburgh and 3 years studying for the ministry at Cambridge. At both universities he was attracted by science: at Edinburgh he read a paper on marine zoology before the Plinian Society, of which he was a member, and was greatly interested in a lecture by Audubon; at Cambridge he became a friend of Henslow, the botanist. The latter recommended Darwin for the position of naturalist on the expedition of the Beagle to the South Seas. During the 5-year voyage Darwin found his lifework. He said: "I worked to the utmost during the voyage, from the mere pleasure of investigation, and from my strong desire to add a few facts to the great mass of facts in natural science."

Shortly after his return to England, Darwin published his "Journal of Travels." Immediately afterwards he began work on 3 books which appeared successively: "Structure and Distribution of Coral Reefs," a classic in geological literature; "Volcanic Islands Visited During Voyage of Beagle;" and "Geological Observations on South America." In 1859 he published "On the Origin of the Species by Means of Natural Selection," which produced as great a stir as Newton's "Principia." Although the theory of evolution was not original with Darwin, he worked for 20 years amassing evidence to prove it. He sincerely believed that the survival of the fittest meant the survival of the best. But his tendency to generalize led him to conclusions not always supported by facts. Carlyle said of the book: "That the weak and incompetent pass away, while the strong and adequate prevail and continue, appears true enough in animal and human history; but there are mysteries in human life, and in the universe, not explained by that discovery." Darwin followed up the "Origin" with the "Descent of Man." His theories, based entirely on matter and its laws, as his wife said, put God "further off." 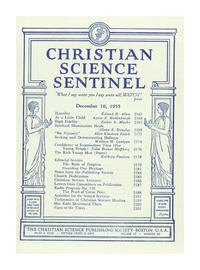