When Paul told his captors at Jerusalem that he was free-born, he was declaring his freedom as a Roman citizen and his title to certain rights and privileges which others at Jerusalem did not enjoy. It is reasonable to suppose that Paul had also gained some sense of his spiritual freedom. He had been healed of temporary blindness, had healed the cripple at Lystra, had himself recovered after being stoned, had escaped several times from his would-be destroyers, and certainly had had notable changes in his character. Out of his own experience he was able to write to the Romans (8:2), "The law of the Spirit of life in Christ Jesus hath made me free from the law of sin and death." Jesus had said before him (John 8:32), "Ye shall know the truth, and the truth shall make you free." Paul had probably glimpsed the great fact that the son of God is freeborn and is therefore free from all belief in evil—in fear, sin, disease, and death.

Mary Baker Eddy has interpreted Paul's declaration that he was free-born in its highest and most profitable sense. She writes in the Christian Science textbook, "Science and Health with Key to the Scriptures" (p. 227): "God made man free. Paul said, 'I was free born.' All men should be free." She also declares in "Miscellaneous Writings" (p. 183), "Man is free born: he is neither the slave of sense, nor a silly ambler to the so-called pleasures and pains of self-conscious matter." 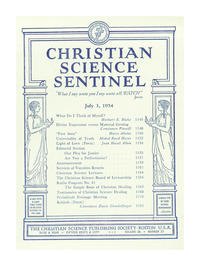