When Christian Science was first...

When Christian Science was first brought to my notice I was suffering from a severe nervous breakdown, with all its fears and distressing symptoms, including extreme physical weakness. It was only after several stubborn refusals to have anything to do with the textbook, "Science and Health with Key to the Scriptures" by Mary Baker Eddy, that I finally opened it and began to read. "If only this is true," I said, "then there is no need for me to suffer so."

I continued reading and applying what I understood each day. The book was continually in my hands, both during the day and during the night hours when I could not sleep. I gained strength rapidly and was soon able to do my normal work. Often I found myself saying to the suggestions which came to me for acceptance, "You don't come from God; I will enter tain only angels," recalling Mrs. Eddy's definition of "angels" in part as "God's thoughts passing to man" (ibid., p. 581). I was completely healed of the nervous condition. Also I became aware that I no longer needed the aid of glasses, although I had been told by eye specialists that I would find them a continual necessity. I have read for many hours daily and have needed no glasses during the past thirty years.

Send a comment to the editors
NEXT IN THIS ISSUE
Testimony of Healing
It is indeed a joyous privilege... 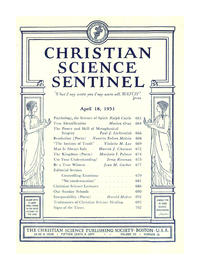