I came to Christian Science in...

I came to Christian Science in order to overcome a sense of inactivity and lack. This was accomplished in a most complete manner when I became obedient to the demands of Science. For some years I had known of the efficacy of its teachings, but had fancied they required too much of me for my acceptance. The demand that I give up smoking was the hardest for me to fulfill; but when I desired to be obedient, even if it necessitated the use of human resistance to the false appetite, my problem was solved. I found that "desire is prayer" (Science and Health by Mrs. Eddy, p. 1), and the smoking habit left me without my making any human effort.

Since then I have received many proofs of healing through the ministrations of Christian Science. I was healed of a badly sprained ankle, influenza, a skin trouble, and a very severe attack of pneumonia. An undiagnosed disease, for which, I think, medical science would have most certainly put me on an operating table, suddenly disappeared. After five days of great distress, accompanied by almost complete functional inactivity, I was able to affirm to a friend sitting with me, "I am healed!" It was true. With no aftereffects of weakness, I resumed my business duties the next day, which proved to be a very full day, extending from ten o'clock in the morning until nine o'clock in the evening.

Send a comment to the editors
NEXT IN THIS ISSUE
Testimony of Healing
I was about seven years of age... 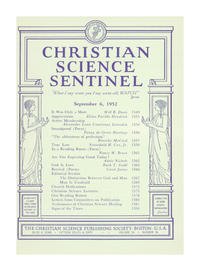