My first healing in Christian Science ...

My first healing in Christian Science occurred over twenty-four years ago. At that time I had been bedfast for over a year and was under a doctor's care. He said that there was no hope for me unless I had an operation. A neighbor asked me if I had ever read the textbook, Science and Health by Mrs. Eddy, and when I replied that I had not, she lent me the book, which I studied day and night. I really did not do so to be healed, but inasmuch as the doctor had said I could not live, and I did not have any religion, I thought I should prepare myself to be saved. I found Christian Science to be not only a religion of salvation, but one that heals, as well as meets every human need. I started to attend a Church of Christ, Scientist, and have been going regularly ever since. "The scientific statement of being," found on page 468 of Science and Health, was the first thing I learned to understand. Through my reading the textbook I was completely healed. From that time I have never used any material remedies whatever.

I have had many healings, including those of injuries sustained in falls and a badly cut finger. Lost articles have been recovered and business problems solved. All these were accomplished through my own study of the Bible and Mrs. Eddy's writings. 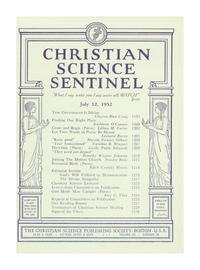