Christian Science has brought me...

Christian Science has brought me health and an awareness of God's presence. After a severe illness in my childhood the doctors said that one lung had withered, and through my school years I was subject to attacks of such severe colds that at last I had to leave high school.

My attention was first called to Christian Science after my marriage, when my wife was healed of a serious heart condition by reading the textbook, "Science and Health with Key to the Scriptures" by Mary Baker Eddy. Later I was healed of a severe cold in a few hours with a practitioner's help. During previous attacks I had been away from work several days. This happened many years ago, and I have never had a return of that illness. Another healing for which I am grateful is that of smoking, a habit of long standing, which left me without a direct effort on my part. 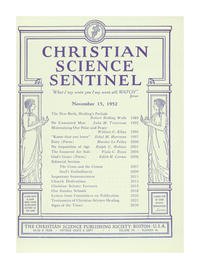