I have been attending a Church...

I have been attending a Church of Christ, Scientist, for about thirty-three years, during which time I have not missed one day from my work and have never been in want for the necessities of human existence.

At the age of fourteen I was taken out of school to assist in supporting a home. However, since that time, through my understanding of Christian Science, I have completed high school and graduated from college by attending night school. During my elementary schooling it was claimed that I had a low intelligence quotient, which according to material law means that such a person would usually have a difficult time performing anything except the simple tasks in life. Christian Science has proved this to be untrue, because during the past sixteen years I have held many responsible executive positions, being head of the educational department of a secondary school, president of a large industrial fraternity, and teacher in a university, among other things. 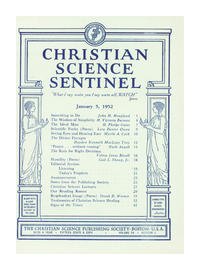