FREEDOM OR BIT AND BRIDLE?

In the first chapter of Genesis we find that God created heaven, earth, and man. He endowed man with all the divine qualities and gave him dominion over the earth. Man was not to be dominated; but created in the image and likeness of his Maker, man reflects the self-government of his God. A misconception of creation says that man is made of both matter and Spirit and that his life is in and dependent upon matter. This false claim has in belief given power and creative ability to matter, and mankind, instead of being free, believes itself subject to this so-called power.

In Psalms we read (32:8, 9): "I will instruct thee and teach thee in the way which thou shalt go. I will guide thee with mine eye. Be ye not as the horse, or as the mule, which have no understanding: whose mouth must be held in with bit and bridle." To be receptive to the instruction of God is to be guided in the way of freedom. But one who believes himself governed by one or more mortal minds will find himself in subjection to controls of many kinds. Having accepted a false sense of law, he attributes substance to matter; and deluded by the belief that personal gain and personal aggrandizement constitute the highest standard of living, he is very much "as the horse, or as the mule, which have no understanding." With a bit in his mouth he is led by mortal mind, which claims jurisdiction over him. 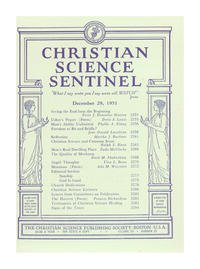