The following words of our...

The following words of our Leader, Mrs. Eddy, stood out to me one Sunday morning several years ago when I was listening to the Lesson-Sermon from the Christian Science Quarterly (Science and Health, p. 167): "Only through radical reliance on Truth can scientific healing power be realized." I was struggling with a disease diagnosed by a physician as gallstones. I awakened to the fact that I must exercise "radical reliance" if I was to be healed; and from then on the disease began to disappear until it was finally completely healed.

Today I am grateful not only for that healing, but for many others as well. I wish to express my deep gratitude to God for the priceless gift of Christian Science. It has been my only physician for nearly forty years and has never failed me when its rules have been correctly applied. Christian Science has sustained me through many sorrows, and it was my comfort during World War II when a beloved son was in command of a bombing group operating overseas. He returned home safely.

Send a comment to the editors
NEXT IN THIS ISSUE
Testimony of Healing
I have been a student of Christian Science... 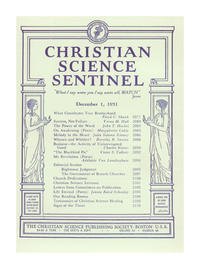