In 1936 I was taken suddenly ill; it seemed as though my back were paralyzed. After I had been at home for several weeks, despite the numerous injections given me by a doctor, my condition grew so much worse that I could no longer get up at all and pneumonia set in. The doctor had me taken to a hospital. Here, too, one injection after another was given without the slightest improvement being effected.

Then my wife heard about Christian Science, and she brought some Science pamphlets to me in the hospital. I had learned something about this Science in America, and I now began to study it. The first effect it had on me was that one day I decided to ask for my realease from the hospital, chiefly because my condition was not improving. I returned home in May, 1936, but was unable to get up. I then tried massage, and when attacked by severe pain, I took the tablets that the doctor had prescribed.

Send a comment to the editors
NEXT IN THIS ISSUE
Testimony of Healing
I began to study the Lesson-Sermons... 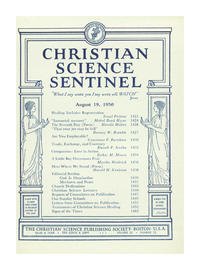