Early in 1915 I first visited a Christian Science practitioner, more to please a friend than with any hope of benefiting myself, although I suffered from chronic indigestion. constipation, and impoverished blood, weighed less than ninety pounds, and had what was called an incurable skin disease. Although no connection was discerned at the time, along with these physical disorders went some very unlovely traits of character, as well as fear, despondency, and spiritual lack.

From this first visit I came away healed of the indigestion and the smoking habit. Grateful and curious, I returned, still seeking "the loaves and fishes" of physical healing, but remained to "seek ... first the kingdom of God, and his righteousness," as the Bible teaches, before "these things"—health, happiness. and success—were added. After years of suffering, when the fear of dying gave place to an understanding of God, I was instantaneously healed of the bowel trouble. Underweight and thin at the time of the First World War, I was denied enlistment in our Army, Navy, and Marine Corps, but in less than six months I received a special appointment to the Army, passed the physical requirements, and served actively in France, where I experienced further proofs of God's protecting love and care. The skin disease disappeared when criticism, resentment, and similar habits of disposition vanished from my consciousness. 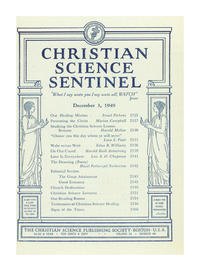