I have been benefited greatly by...

I have been benefited greatly by the study and application of Christian Science. Our family became interested in this Science through the healing of my father of diabetes. A doctor had pronounced it a severe case and had placed him on a rigid diet, forbidding the use of sugar or starch in any form, and had warned him that deviation from this diet might have serious results. It was probably as much of a trial to our family as it was to him that he could no longer eat with us the things which he had especially enjoyed, and it was a great relief to all of us, when he took up Christian Science treatment, to find that he could eat anything he wished and my mother could dispense with the unappetizing cooking. Under Science treatment he again became healthy and robust.

Up to the time I entered the Christian Science Sunday School, I had suffered much from badly decaying teeth. We had found one medicine which relieved the violent pain, but after I began attending Sunday School, my parents allowed me to call a practitioner, and we found that this too relieved the pain readily. But an occasion arose when I was not able to locate the practitioner although I made several trips to her home during a period of two days, and I did not myself seem able to overcome the pain. Eventually I was able to reach her, and she said she would work for me. In about fifteen minutes the worst of the pain had ceased, and in three quarters of an hour I was perfectly free. Since that time, a period of at least forty-one years, I have never had a toothache and have had only two small fillings, which were both put in painlessly in a half-hour's time. All subsequent visits to the dentist were without pain. On three occasions I have had fillings replaced which were put in prior to this healing, and some very unsightly roots disappeared, although I had been told by the dentist two or three times that they should be extracted because they were apt to cause trouble.

Send a comment to the editors
NEXT IN THIS ISSUE
Testimony of Healing
I did not come into Christian Science... 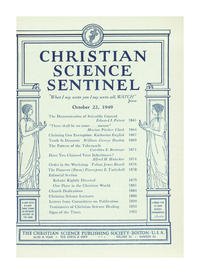