I should like to express my gratitude for Christian Science. My family came to Science when I was young, for a healing, and we children were enrolled in the Sunday School. I have always been grateful for the firm foundation in the truth that was gained there.

While serving on active duty with the Marine Corps, I had many experiences of protection and healing. The beliefs associated with inoculations were met so that there were no unpleasant results. One physical healing in particular stands out. One day after the noon meal I became violently ill. I left came to ask help from another Scientist who was on the same island. Later in the afternoon, although the trouble was not yet overcome, it was imperative that I return to camp. I was met at my tent by the battalion doctor, who asked me if I had been ill that afternoon and stated that several men had been sent to the hospital because of poisoned food. Before I could answer, another violent attack hit me. He insisted that 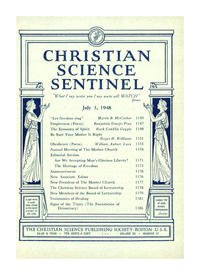