One afternoon the writer turned away from studying about the one and only creation, which in its spiritual intactness and perfection exists throughout all eternity, and looked from the porch where she was sitting out to sea. The water was rough. The tide had been coming in for some time. And now the near-by stone breakwater was all covered—all except one protruding slab of a rock, which projected its head a few feet above the rest of the wall. Every high wave splashed almost to its top, then over it, then receded, and the level of the water sank, only to be lifted by a more powerful wave. The projecting rock seemed to bend and sway with every sweep of the incoming tide, as long as the writer stood and gazed at it.

But the evening before, when the tide was out, the writer had sat in the same place, drinking in the peace and quietness of the scene—the bare, flat, far-extending beaches; the smooth sand bars; and the long wall of rocks, all exposed, which had remained fixed and immovable for years as the tides swept in and out. And because she had seen this, she knew that what appeared as a bending, swaying rock must be only the optical illusion caused by the constant motion of the waves. 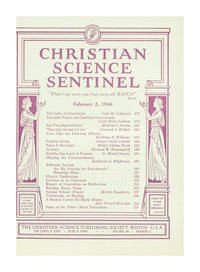