A Successful warrior discerns what the enemy is trying to do and sees that he does not do it. On page 453 of the Christian Science textbook. "Science and Health with Key to the Scriptures," Mary Baker Eddy writes, "Hidden sin is spiritual wickedness in high places." Hidden sin must be uncovered, its motives and methods of operation exposed and defeated. The purpose of evil is to mesmerize, limit, enslave, and destroy mankind. It operates as aggressive mental suggestion, through the medium of the corporeal senses.

In Christian Science, all evil is summed up in one term, "mortal mind." Paul refers to this so-called mind as "the carnal mind," and describes it as "enmity against God." Christ Jesus referred to the devil, or mortal mind as a liar, saying (John 8:44): "He was a murderer from the beginning, and abode not in the truth, because there is no truth in him. When he speaketh a lie, he speaketh of his own: for he is a liar, and the father of it." 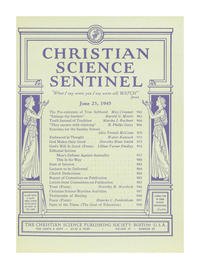