Many years ago, while living in...

Many years ago, while living in the East, I fell on an icy pavement and injured my left hip. The injury was not noticed at the time, and later, when a painful condition developed, it was thought to be rheumatism. Two years later, when I moved to the West Coast, it was found that a malignant tumor had formed. An operation followed, but the tumor was only partially removed because it was thought I could not live. However, the following year the remainder of the tumor was taken out and then it was discovered that the bone had become carious. For several years thereafter various operations were performed because of this condition. However, there was no improvement.

In this extremity I was told about Christian Science by a friend who came to the hospital. When I left, I went to a Christian Science practitioner, who said I must trust God implicitly and dispose of the medical remedies on which I was relying. I was not ready to take this radical step, but did dispose of the medical remedies. However, I soon went back to the hospital for another operation. This one was also unsuccessful, and I was told that the bone had become so thin it would not stand another scraping. About this time I went to see a surgeon of a different school of medicine who was considered very successful with cases of this nature. He found that the entire tissues of the hip were diseased.

Send a comment to the editors
NEXT IN THIS ISSUE
Testimony of Healing
With unbounded gratitude to... 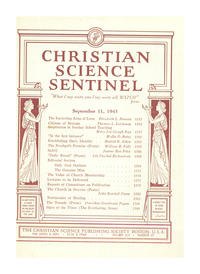