When he served in the first World War, the writer found the frequent use of profane language both displeasing and distressing. When he recognized that this difficulty would have to be met in line with the teachings of Christian Science, he laid the matter before a practitioner. His attention was immediately directed to the third commandment: "Thou shalt not take the name of the Lord thy God in vain; for the Lord will not hold him guiltless that taketh his name in vain." During their conversation the practitioner remarked, "When you cease to listen for profanity, you will cease to hear it." It was further explained that as the student purged his thought of disobedience to the third commandment, violation of its requirements would no longer be manifested in his experience. Soon he gratefully observed that no profane talk was being indulged in his presence. In the intervening years the permanency of the demonstration has been firmly established.

The third commandment definitely prohibits profanity and covers every phase of swearing as that term is commonly employed. In the light of Christian Science the command implies more than mere abstention from audible violation. Spiritually interpreted, to take the name of God in vain includes any departure from that which is in absolute accord with Principle. It includes not only light, irreverent, careless, or insincere speech, but thought and action as well. Any false belief that dethrones the Christ-ideal in human consciousness is taking the name of God in vain. We pollute or profane God and His name when we speak irreverently of or act wrongly toward His spiritual ordinances. The Levitical law reads, "Ye shall not swear by my name falsely, neither shalt thou profane the name of thy God: I am the Lord." 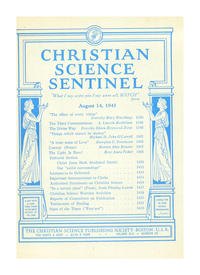