"The higher truth lifts her voice"

In the Christian Science textbook, "Science and Health with Key to the Scriptures" (p. 97), Mary Baker Eddy, the Discoverer and Founder of Christian Science, gives us a statement that has been frequently quoted: "It requires courage to utter truth; for the higher Truth lifts her voice, the louder will error scream, until its inarticulate sound is forever silenced in oblivion." Mortal mind would like to convince us that all our efforts to solve a particular problem are in vain, as the louder screaming of error sometimes seems to indicate. Yet, the divine wisdom which inspired our beloved Leader in all her writings would not let her end the sentence with a thought of discouragement— with error's screaming—but made her add the words "until its inarticulate sound is forever silenced in oblivion." So conclusive is this statement that it leaves no doubt as to the only scientific disposition of any and all error. In these significant words we are definitely told how long we must continue to work if we would have our complete freedom not only from one but from all the ills "that flesh is heir to."

In the sentence preceding the one quoted from the textbook in the above paragraph, Mrs. Eddy states, "The broadest facts array the most falsities against themselves, for they bring error from under cover." By its very nature, error—never more nor less than a lie—prefers to be under cover, for there only can it ever hope to simulate power. No longer can it remain covered when "the broadest facts" are presented, when the truth about any lie is revealed. On the contrary, it is brought out into the open and its falsity exposed; yet not without the protest that is evidenced by its screaming louder and louder as Truth lifts her voice. However, such an occurrence should not disturb or discourage us, if we realize that the voice of Truth is the voice of God, the voice of omnipotence, which can never be silenced, but which can silence and will ultimately destroy any and all phases of error. 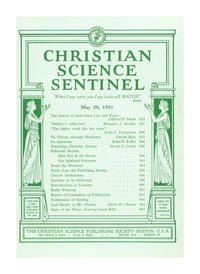