The Wartime Fund is used to make available the services of Christian Science Wartime Ministers and other similar civilian workers, to promote the spiritual welfare of Christian Scientists and others serving in the forces of the United States and its allies. It is used to supply the men in camps and forts with authorized Christian Science literature, and it may also be drawn upon for the general relief of human suffering as the result of the war in countries where it can be administered. For all these activities many expressions of gratitude are being received constantly. 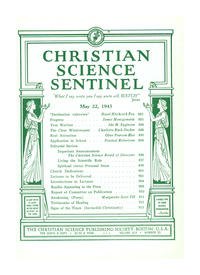