Christian Science has been a constant source of strength and comfort to me for many years, although it was not through any particular healing that I took up its study. I read an article by a Christian Scientist in a secular magazine and was convinced that this was the religion I was ready to accept. In earlier life I had never been quite satisfied with the teachings of an orthodox church to which I belonged. Later on my husband and I stopped going to church. However, when he saw that I had become interested in reading the textbook of Christian Science, "Science and Health with Key to the Scriptures" by Mary Baker Eddy, which had been lent to me by a friend, he became very antagonistic to what he thought Christian Science represented. He eventually would not allow me to teach it to the children.

About six months later my husband passed on, and it was most certainly Christian Science which sustained me during this time of trial. Some ten years later our home on the farm was broken up, and I was led, with some of my family, to move into the city.

Send a comment to the editors
NEXT IN THIS ISSUE
Testimony of Healing
Words alone can never express... 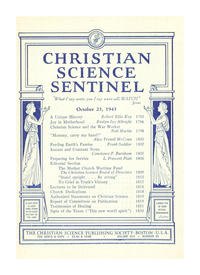