I feel the urge to express my...

I feel the urge to express my gratitude for Christian Science through the broad channels of the periodicals. I have studied this Science since 1911, and during that time have never been in bed a day from illness of any kind. My first healing was of chronic malaria, which had developed into a severe stomach trouble. I had been able to eat only certain foods, and during my healing of ten days' duration I asked the practitioner what I could eat. He said, "Anything you like." This was good news to me. From then on I did so and without any harmful results. This malarial trouble had also caused gallstones, which one physician had said would require an operation. The operation was never needed. I was also healed of goiter.

I am most grateful for the help I am daily receiving in overcoming undesirable traits of character, such as sensitiveness, intolerance, prejudice, and an egotistical sense of extreme likes and dislikes.

Send a comment to the editors
NEXT IN THIS ISSUE
Testimony of Healing
It is not possible for me adequately... 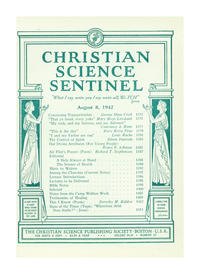