Freehold, New Jersey (First Church).—First Church of Christ, Scientist, Freehold, held two dedication services in the church edifice on Sunday, April 13, 1941. The two services were identical, and the church was filled to overflowing at both the morning and the afternoon service. The regular Lesson-Sermon from the Christian Science Quarterly was preceded by a brief history of the church, read by the First Reader.

This history showed that a little group of Christian Scientists met in a private home on Sunday, March 18, 1917, to read the Lesson-Sermon. This was the beginning of the persent Christian Science church in Freehold. During the intervening years, there has been considerable growth in interest and numbers. Services were held in rented quarters at several different locations. In 1929 a building fund was established, and from that date forward there was definite effort and thought given to the aim of acquiring and owning a church edifice. 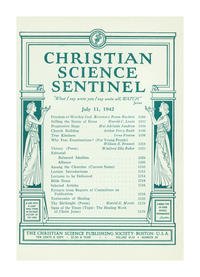