"Let the redeemed of the Lord say so." I wish to express...

"Let the redeemed of the Lord say so." I wish to express my gratitude for Christian Science and to recount some of the healings which have taken place in my family.

On one occasion when I was young in Science, my husband and I went fishing. He left me and went a mile farther up the creek, where he was bitten on the foot by a copperhead moccasin, which supposedly is as poisonous as a rattlesnake. He was not a Scientist, but had often listened to the reading of the Lesson-Sermon in the Christian Science Quarterly. When the bite occurred he was seized with fear; then came the thought that it could not hurt him. He returned to where I was, and I knew that God was with us and no evil could be in His presence. We were sixty miles from a hospital and ninety miles from a practitioner. He first mentioned the hospital, and I agreed to go wherever he wanted to go. We hurried home and prepared to leave as quickly as possible, our destination still undecided. Finally he came in and asked what I wanted to do. Of course I wanted Christian Science treatment, and he agreed to have it. It was late in the afternoon, and when we reached the first telegraph station it was closed for the supper hour. We had traveled fifty miles before we were able to wire the practitioner. During this time both of us were free from fear. He knew when the practitioner began her work, for he had been in pain, but in a short time he broke out in sweat and told me he was free.

Send a comment to the editors
NEXT IN THIS ISSUE
Testimony of Healing
Because of my gratitude for the many blessings that... 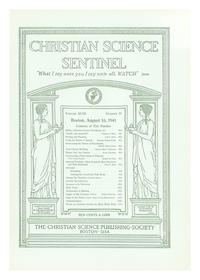