I want to express my gratitude for all that christian Science...

I want to express my gratitude for all that Christian Science has done for me. I first became interested in it some twenty-one years ago, at a time when life seemed very dark to me, for I had been left penniless, with a small baby to support. I was so heartbroken that there did not seem to be anything cheerful to look forward to, but one of my mother's neighbors, who was a Christian Scientist, sent word for me to come to see her. I went, little dreaming of the encouragement I was to receive. I had to go back to our homestead to complete the necessary requirements for proving up and getting the patent for the property. When I arrived at my railroad destination, about thirty miles from the homestead, I was met by one of my old neighbors, who told me that the directors of a school only six miles from my home were looking for a teacher. Before we left the town, arrangements had been made with the county superintendent for a permit allowing me to teach until I could take the necessary examinations and renew my teaching certificate, which had lapsed.

While teaching in this school I became acquainted with another Christian Scientist, who gave me some literature, and I made a special trip—walking part of the way—to the town where there was a Christian Science Society. There I attended the Sunday morning service and purchased a copy of Science and Health by Mrs. Eddy. I read it eagerly, and glimpsed something of the truth it contained. One evening I became so sick that it seemed doubtful if could keep going. The friend who was visiting me said that this was a chance to try Christian Science and see if there was anything in it. I read until three or four o'clock in the morning, and then dropped off to sleep. I awoke in time to go to school, feeling entirely well.

Send a comment to the editors
NEXT IN THIS ISSUE
Testimony of Healing
As a boy in a Christian Science School, I often... 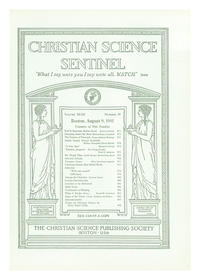