A Student of Christian Science was recently asked to work with a committee whose members were planning an educational program on the subject of highway safety for young people. It seemed as though much of the emphasis, during the conference days, was laid upon the belief that it is unsafe to walk and drive along the highways of our country, rather than upon the side of highway safety.

At the end of the first day the student found herself driving home with a sense of fear in her thought. Realizing that if true safety were to be taught, it must first be realized in her own consciousness, she turned to the Bible and the writings of Mary Baker Eddy for a clearer understanding of the truth. 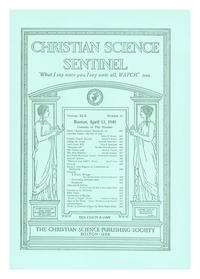