The Indestructibility of Spirit

In the Scriptures, Moses stands forth pre-eminently as the great enunciator of moral law; and it is upon the basic rules for conduct set forth by him that much that is of lasting value and of an indestructible character in social and national equity has been built.

Tending the flocks of his father-in-law, Moses led them "to the backside of the desert," and it was by that way that he came to Mount Horeb. He had forcibly taken justice, even revenge, into his own hands in Egypt on behalf of his own people, and had then fled from the retribution he feared Pharaoh might mete out of him. During his wanderings as a fugitive, his care of the flocks committed to his charge served as an apprenticeship to the great tasks which lay ahead of him as liberator and leader of the Israelites under God's command. During these wanderings he was gradually being awakened to perceive the divine nature of that which he had been called upon to undertake. 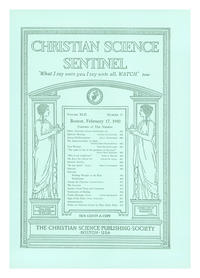