A few sentences on pages 293 and 294 of "Science and Health with Key to the Scriptures" by Mary Baker Eddy, entirely reverse the point of view presented to mortals by material sense. They read: "The five physical senses are the avenues and instruments of human error, and they correspond with error. These senses indicate the common human belief, that life, substance, and intelligence are a unison of matter with Spirit. This is pantheism, and carries within itself the seeds of all error." Thus, in Christian Science, the material or physical senses, with which is associated the belief that matter is real and that life is dependent on matter or on a union of matter and Spirit, are regarded as false or erroneous. The senses upon which mortals place such reliance never report anything real, never make known the truth about real being. In testifying as they appear to do about so-called matter, they are deluding mankind. In witnessing to evil and the seeming effects of evil, they are blinding mankind to the truths of perfect spiritual being. 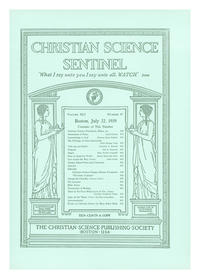