The Brotherhood of Man

The brotherhood of man—how far off the realization of it sometimes seems to be as one contemplates today the struggling, striving world of mortals! As never before in human history do we find in certain quarters racial traits accentuated, national characteristics stressed, all striking at the ideal of the brotherhood of man. No doubt, the ideal is recognized by many in every nation and the effort made by them to bring it to practical realization in good will, friendliness, and co-operation, but it has to be admitted that the realization is far from being universally achieved; indeed, it is far from being recognized as a possibility by the majority as the ideal for the human race.

What is it that is preventing the demonstration of the brotherhood of man? Two things are chiefly responsible, as Christian Science shows. One is the belief held by mankind that evil is real—as real as good; the other is the fallacy that God is not the Father or creator of man, and that man is separated from Him. Mrs. Eddy speaks very plainly of the first of these when she writes (Miscellaneous Writings, p. 18), "Only by admitting evil as a reality, and entering into a state of evil thoughts, can we in belief separate one man's interests from those of the whole human family, or thus attempt to separate Life from God." That is a deeply interesting statement, going as it does right to the heart of the subject. Mortals, by believing evil to be real and by thinking evil thoughts, separate, in belief, their interests from the interests of the other members of the human race, and themselves from the Father of all, God. 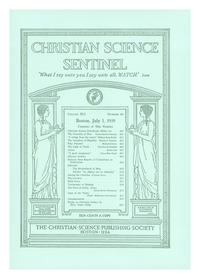