One day a student of Christian Science who was sitting out of doors noticed his neighbor's dog lift its ears and then run quickly around the house to the garage. The student was puzzled at the dog's actions until, a moment later, he saw the neighbor's car come over the hill. The dog had heard and recognized the purring of the motor before the student was aware of a sound. If a dog can instantly hear the sound of a motor, surely, thought he, a Christian Scientist can learn to hear the voice of infinite Love, which is constantly imparting correct instruction and guidance to all. It was noticed, moreover, that the dog sprang into action immediately; he did not delay a second in going to the garage.

The student was aware that mortals are sometimes too absorbed in their own thought to hear even ordinary conversation, and often interrupt others with some trivial comment. As he realized what an important part a truly listening attitude is to one's progress, the student became more attentive in various ways, listening when others were speaking, listening to the readings in the Christian Science services and to the words of the songs. It was surprising to him to note how quickly this method of self-discipline brought good results. How many important messages have been lost to us through our inattention! Spiritual advancement is always more rapid when one maintains an attitude of strict attention to Truth. 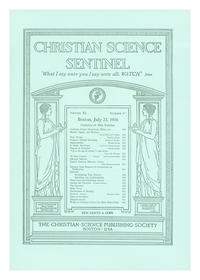