The world is greatly perplexed at present over its difficulties. In belief, it is a sinful, sickly, oftentimes sorrowful world; and recognizing itself as such, what would it not give to be rid of its troubles? A highly significant thing about the situation is that men and women everywhere are aware of the need of readjustment of thought on moral and spiritual questions. In consequence, many are the theories which are advanced, the schemes suggested, the proposals made, to establish order instead of mental chaos, peace instead of turmoil, harmony and joyousness in place of comfortless discord. The need is felt for universal salvation, and to bring it about is the sincere desire of all who have the welfare of humanity at heart. Notwithstanding its moral weaknesses and spiritual shortcomings, however, mankind generally must be given credit for its efforts after that which will raise its ethical standards and increase its spirituality, to ensure a happier, healthier, nobler race of men.

There is only one way to bring about that of which mankind is so greatly in need; and Christian Science reveals it. Mrs. Eddy makes a notable statement on page 94 of "Science and Health with Key to the Scriptures," which is worth considering by all. She writes: "The eastern empires and nations owe their false government to the misconceptions of Deity there prevalent. Tyranny, intolerance, and bloodshed, wherever found, arise from the belief that the infinite is formed after the pattern of mortal personality, passion, and impulse." That is a sweeping statement; but one has to reflect only for a moment to recognize how true it is, and to admit the far-reaching effect which the concept of Deity held by a nation has on its government and on its conduct relative to its own people and the people of other nations. 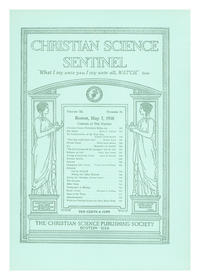