The Omnipotence of God, Good

The persistent claim of material belief is that there are two forces operating in human experience, namely, good and evil. These forces are apparently forever at war with each other, striving to predominate in human consciousness and experience. The Apostle Paul recognizes this seeming conflict where he states in his epistle to the Romans: "The good that I would I do not: but the evil which I would not, that I do;" and, "I find then a law, when I would do good, evil is present with me." However, when thought becomes instructed sufficiently in the spiritual facts of being, as revealed in Christian Science, how untrue and impossible the belief of any power apart from God is seen to be!

The first chapter of Genesis recounts the facts of the spiritual creation, in which God created the universe, including man, and goes on to state, "God saw every thing that he had made, and, behold, it was very good." This true record of the spiritual creation once and for all disposes of any possible reality in evil or any power opposed to God. The divine Mind made all that was made; and this creation fills all space, thereby leaving no place in which any other power could exist. It follows, then, that as God is the sole creator and His creation was pronounced "very good," good is the eternal nature of that which is real. 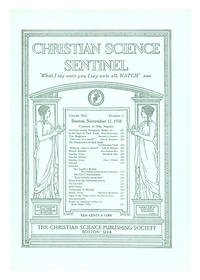