The student of Christian Science can always be assured that as he seeks divine inspiration for healing, he is utilizing "the effectual fervent prayer of a righteous man" that "availeth much." One who was desirous of receiving help in a difficult situation which was troubling herself and others, sought the quietude and peaceful atmosphere of the original Mother Church edifice. As she was waiting for a spiritual message to quiet the tormenting arguments coming up with such relentless force, she found herself gazing at a beautiful stained glass window portraying the raising of Lazarus, and at once came the thought she needed, "Loose him, and let him go." At his beloved Master's bidding Lazarus had come forth from the sepulcher still bound in graveclothes. The false law of death which the carnal mind held to be so strong and inexorable did not concern Christ Jesus, whose mission was to do the will of his Father and to acknowledge only the immortal and incorruptible. With divine authority the Master bade the onlookers loose Lazarus from the bindings of death, and set him free.

The student knew that the light had come to her. The sense of responsibility was lifted because she saw that in the case of each one on whom her thought rested the Christ was bidding her, "Loose him, and let him go," and that, instead of being aggressive and afflictive, the experience was to be a glorious opportunity to praise God and realize the power of spiritual might, thus enabling her to say with a singing heart, "Father, I thank thee that thou hast heard me." When later on the healing of the situation was completed, this was seen as a natural outcome of true prayer. 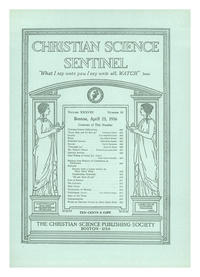