"The inhabitants of the rock" (Isa. 42:11)—The Hebrew word "Sela," here literally translated "the rock," is taken by the Revised Version and various modern commentators as a proper name, and as designating the famous Edomite city of "Sela," which, in turn, is usually identified with what was later called "Petra." Petra was situated some fifty miles to the south of the Dead Sea.

Send a comment to the editors
NEXT IN THIS ISSUE
Testimony of Healing
Before I became interested in Christian Science, I visited... 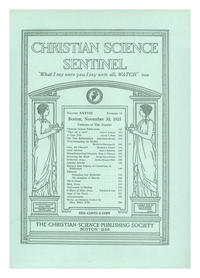