About twelve years ago I heard of Christian Science just...

About twelve years ago I heard of Christian Science just after I finished training as a medical nurse, and I rejoice to say I believed in it at once. I was quite healthy, and at first did not think of the physical side of the question, but only the moral; for it was the religion that appealed to me. For the first time I knew how to pray. That which had always puzzled me as a child was how people knew when they had contact with God. I found through the teaching of Christian Science that entertaining holy, pure thoughts, and knowing that these thoughts alone have power and come from God, the one and only Mind, is having contact with God. I came to understand that unlovely thoughts, such as resentment, jealousy, anger, irritation, hate, and so on, are but illusions, the product of "the carnal mind," which, as Paul tells us, is "enmity against God," and the cause of disease, accident, and death. I found too, that Christian Science destroys all belief in a law of heredity. This cheered me very much, for so many people who came under my care were suffering from that cruel so-called law.

As the understanding grew that any thought which does not come from God is powerless to do anything unless one gives it power, I was tremendously uplifted, and knew that in holding to this knowledge I was praying "without ceasing." I do not mean that it was always easy to detect wrong thoughts, for there were many things which I had not known to be wrong. For instance, the superstitious teaching I had received in my childhood regarding God, angels, devil, hell, the pit, had stamped itself strongly. I found false theology and superstition continually trying to cloud my vision; but I thank God I was shown the way to see through their powerlessness. I find that the holy, pure, loving influence of Christian Science is gradually wiping them out.

Send a comment to the editors
NEXT IN THIS ISSUE
Testimony of Healing
When about six years old I asked to be allowed to attend... 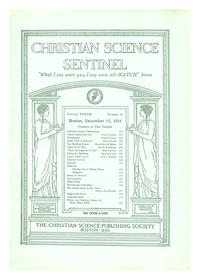