The Annual Meeting of The Mother Church, held on June 5, was attended by a large number of members from far and near. The addresses and reports, which showed the progress of the movement during the year and emphasized the need for continued consecrated effort, were listened to with much appreciation. A feature of the meeting was the deep gratitude evinced for the new Publishing House, for the forethought and courage of The Christian Science Board of Directors in initiating the work of building, and for the faithful labor of all those associated with the undertaking.

The meeting began with the singing of hymn 207, "O gentle presence," by Mary Baker Eddy. The retiring President, the Hon. Ralph O. Brewster, former Governor of Maine, then read the following selections from the Bible and "Science and Health with Key to the Scriptures": 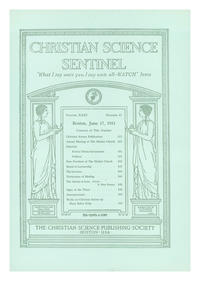