"The Principle of Christian Science"

Christian Scientists rejoice in knowing God as Principle because the word conveys to them the sense of His absolute unchangeableness and permanence, besides giving them an understanding of Him as the cause of all that really exists. "What is the Principle of Christian Science?" asks Mrs. Eddy on page 1 of "Rudimental Divine Science," answering the question in the words: "It is God, the Supreme Being, infinite and immortal Mind, the Soul of man and the universe. It is our Father which is in heaven. It is substance, Spirit, Life, Truth, and Love,—these are the deific Principle." A wonderful definition of God! There is such a wealth of meaning in the definition that it will repay the most careful study.

Since God is Principle He never changes; His law never changes; His will never changes. And since He is infinite good the fact is established that good perpetually exists and is everywhere present—a marvelous truth, which remains unshaken no matter what the carnal mind may argue to the contrary. Indeed, the understanding of God as unchangeable Principle, as infinite good, denies reality to evil, to whatever appears to be the opposite of good. Having perceived the truth that God is infinite good, our Leader drew the conclusion that evil is devoid of Principle and is therefore unreal; that evil is but an erroneous concept of supposititious mortal mind. Christ Jesus knew the unreality of evil; for, as John records in the eighth chapter of his Gospel, the Master declared that "when he [the devil, evil] speaketh a lie, he speaketh of his own: for he is a liar, and the father of it." The world is awakening, perhaps more quickly than many suppose, to the significance of this tremendous fact. 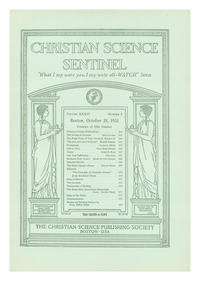