HOW beautiful the swift flight of a bird sweeping aloft on joyful wing! How aptly it symbolizes that spiritual elevation and freedom which the understanding of Christian Science brings to the human consciousness, lifting it upward and Godward, as it were, on wings of joy! This joyousness is not, however, mere emotionalism, for it is born of a perception of the allness of God, His ever-presence and infinite goodness, and is in no way contingent on the evidence of the physical senses.

In various passages Mary Baker Eddy refers to birds and wings metaphorically to point some metaphysical fact. She writes in her Message to The Mother Church for 1901 (p. 2), "Only a firm foundation in Truth can give a fearless wing and a sure reward." Obviously, then, the Christian Scientist must base his thinking on the firm foundation of Truth—the allness of God, good, and the nothingness of evil—that he may rise on "fearless wing" to mental heights of security and peace. Is not the "fearless wing" also the joyful wing? This upward soaring of consciousness, with its attendant gladness, is a vital element in the demonstration of Christian Science, for it betokens trust in Truth and faith in divine Love, and enables one to give thanks even before the visible manifestations of healing and liberation appear. Our Master, Christ Jesus, not only expressed this quality in abundant measure, but also expected his students and followers to do so. Hear his words: "These things have I spoken unto you, that my joy might remain in you, and that your joy might be full." Sustained joy breaks the mesmerism of fear, doubt, and defeat. But one cannot attain this consciousness if he persists in gazing intently at the evidence of the senses, whether it be disease, sin, discord, or lack. There must be a resolute turning away from matter and an earnest facing towards Spirit and spiritual ideas. There must be trustful acceptance of Mrs. Eddy's assurance, given in "Science and Health with Key to the Scriptures" (p. 261), "Fixing your gaze on the realities supernal, you will rise to the spiritual consciousness of being, even as the bird which has burst from the egg and preens its wings for a skyward flight." 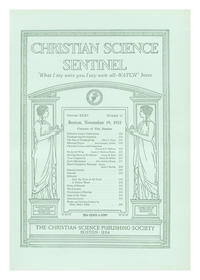