In refutation of a clergyman's statement that "the doctrines...

Bath and Wilts Chronicle and Herald

In refutation of a clergyman's statement that "the doctrines of Holy Scripture are contradicted on every page of Mrs. Eddy's writings," I would refer our critic to the first Tenet of the Christian Science church: "As adherents of Truth, we take the inspired Word of the Bible as our sufficient guide to eternal Life" (Science and Health with Key to the Scriptures, by Mary Baker Eddy, p. 497; Manual, p. 15). The spiritual interpretation of Scripture in Christian Science may differ in some respects from that held by our critic, but he must remember that each one of the numerous other Christian sects no doubt also differs from him in some respects. The test of the relative correctness of these differing concepts of Scriptural teaching lies, surely, in the results which they produce. Christian Science is willing to be judged by the Master's test: "And these signs shall follow them that believe; . . . they shall lay hands on the sick, and they shall recover." I submit that one whose Christian ministry does not include obedience to our Lord's commands not only to preach the gospel but to heal the sick, is hardly in a position to judge those who furnish these outward and visible proofs of a correct understanding of the Master's teachings. Until our friend has something better than Christian healing to offer as proof of the efficacy of his religion, it would be well to obey the Scriptural injunction, "Judge not, that ye be not judged."

Further exception is taken to the remark, "God can have no knowledge of the world as we see it" (the italics are mine). Here again Christian Science takes the viewpoint of Scripture that "now we see through a glass, darkly; but then face to face: now I know in part; but then shall I know even as also I am known." When we have spiritualized our concept of God, man, and the universe, we shall see everything as God sees it, that is, as it really is, and God's government of His perfect universe will be revealed to us as the "new heavens and a new earth, wherein dwelleth righteousness."

Send a comment to the editors
NEXT IN THIS ISSUE
Article
It is gratifying to read in your issue of March 2 an account... 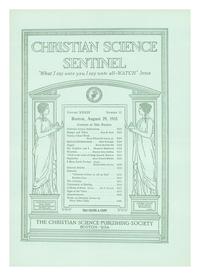