Christian Science as a remedial agent was first proved...

Christian Science as a remedial agent was first proved to me in the year 1908 by the healing of one of my family of the alcohol habit. This was the first time I had known of Christian Science. I learned of it through some Christian Science periodicals which I found lying about in a furnished house we had rented for the season. A short time after this healing was effected through the ministrations of a practitioner, I was attacked by an old enemy which had followed me at intervals since young womanhood. I had suffered for several days from an acute attack of indigestion, with sleepless nights and restless days. I remembered having read in the periodicals that one had been healed by reading the textbook, "Science and Health with Key to the Scriptures" by Mary Baker Eddy, and as that was also available in this completely furnished house I took it and retired for the night. I read for an hour or so and then fell asleep, waking to find it was morning. I arose and partook of a hearty breakfast, with no ill effects. During the years since then I have had no return of stomach trouble. Other erroneous conditions which seemed severe have also disappeared.

I was a medical nurse before I learned of Christian Science. Since then, I have seen numerous forms of error healed through the application of the truth as taught by Christian Science. Though I am very grateful for the physical healing of disease, I am especially thankful for the illumination of the Bible through the study of our textbook; to realize what is meant by man as God's image; to be released from doubt and misgivings; to be able to realize, when we pray "Thy will be done," that God's will is eternally good, and that there can be no doubt of our prayer being answered and that all good is ours. It is a privilege indeed to live in this age when Christian Science is shedding abroad the light of truth which reveals God and His Christ to the receptive in thought.

Send a comment to the editors
NEXT IN THIS ISSUE
Testimony of Healing
In the late summer of 1924, when I seemed to be in the... 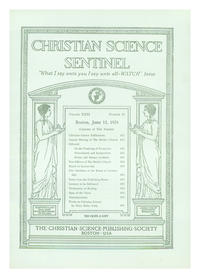