The City of Refuge

Under God's instruction Moses ordered the appointing of cities, called "cities of refuge," where one who had committed an act which was punishable under Moses' law of "eye for eye, tooth for tooth," might flee and find protection until he had the opportunity of pleading his cause. If the act committed was an unavoidable and unintentional accident, one might safely abide there until the passing on of the high priest who was in office at the time of offense. So long as one remained within the border of the city, the enemy, or the person who considered himself injured and therefore under the Mosaic law entitled to retribution, could not disturb or molest him; but if he went outside the city, the one claiming restitution was justified in meting out punishment.

There is a spiritual city of refuge to which we may flee in times of danger from our so-called enemies. Entering therein, we may plead our cause and find protection in proportion to the rightness of our cause and the earnestness of our pleadings. Knowledge of this city of refuge is one of the boons which Christian Science has brought to this age. In "Pulpit and Press" (p. 3) Mary Baker Eddy, the Discoverer and Founder of Christian Science, has written: "He [Jesus] also said: 'The kingdom of God is within you.' Know, then, that you possess sovereign power to think and act rightly, and that nothing can dispossess you of this heritage and trespass on Love."

Send a comment to the editors
NEXT IN THIS ISSUE
Article
Understanding Christ, Truth 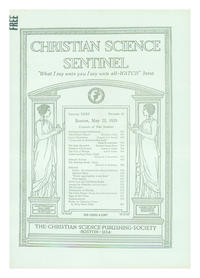