Letting in the Light

The world is always seeking after more light. Just as seeds dropped into the soil reach out involuntarily towards the light aboveground, so humanity, weary of its sick and sinful beliefs, is reaching out towards the light of Truth, yearning for the unfolding of that which will reveal something better and more satisfying than the seeming life in materiality which it lives to-day.

A student of Christian Science was living in an upper room of a house in a busy street of a city. The two windows of this room reached from ceiling to floor, thereby letting in a great amount of light, and, if the day were fine, floods of afternoon sunshine. One afternoon in April, after a dull, cold morning with a bitter wind blowing, the sun suddenly came out and filled the room with radiance. While it shone, the student had occasion to go out to the letter box at the end of the street, and was surprised to find on leaving the house that all was coldness and gloom, with no smallest ray of sunshine to temper the wind. She found herself bemoaning that the spell of sunshine had been so short, posted her letter, and hurried back to the house. After mounting two flights of stairs she opened the door of the upper room and paused in amazement, for it was still flooded with the radiance of the sun, and she had mounted from gloom and coldness into light and warmth again. In a moment she realized that the sun had not stopped shining while she had been in the street; the high buildings had merely shut it out from those who walked there. If they would become conscious of its light and warmth, they would need to leave the level of the street and ascend to a higher elevation. 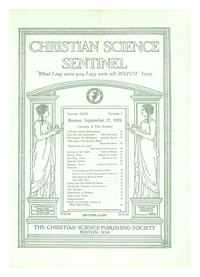