The world is quite used to the thought of sheaves. It has been hearing of them for many a long century. They have generally been associated with harvests, and the very word brings to one the sense of provision and plenty, of reaping and gathering, of possessing and having the ability to dispense. Artists have presented sheaves pictorially, writers have written of them metaphorically, men have accounted their gains in proportion to their multiplicity, and still we have much to learn in connection with sheaves.

To no one is the term "sheaves," when considered from a mental standpoint, more prolific of meaning than to Christian Scientists. Because they perhaps pay more attention to their mental sowing than any other class of people, harvesting becomes almost constant process, and in consequence much attention is given to sheaves. They also accept without reservation Paul's statement, "Whatsoever a man soweth, that shall he also reap." There is never an hour when they are not having this proved to them, although they may not always be awake to discern it. Sowing is therefore that which needs most careful attention, since it is only in proportion to its perfection that the harvest shall bring forth abundance and of a right kind. 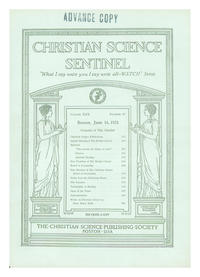